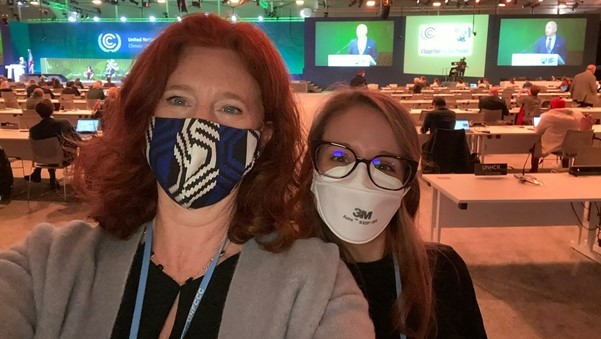 It’s ten years since I attended a UNFCCC summit. I’m eager to see the huge shifts that have taken place since Cancun, where I lobbied with the Water & Climate Coalition to put water on the agenda. It was considered a marginal issue!  And today, there are countless sessions about adaptation. Tragically, this is because we have failed to act in time to mitigate the impacts of climate change.

This time, I’m here to develop the Bonsucro roadmap on climate action for the sugarcane sector, in line with our strategic objectives to further reduce GHG’s in sugarcane farming and milling in line with the Paris targets of 1.5, and to support adaptation and resilience in key origin countries.

Pledge to end deforestation by 2030 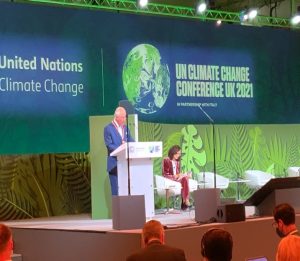 Day one. Morning started with the first major political commitment at COP26,  over 100 world leaders promising to end, and reverse, deforestation by 2030.  Positive speeches from leaders such as Joe Biden (USA) and Nana Akufo-Addo (Ghana) pledging their support to end deforestation.

New public and private funding was announced, including an appearance by Jeff Bezos (in the background).  In total some $20bn of funding was committed, including £1.1bn fund from this total will be established to protect the world’s second largest tropical rainforest in the Congo Basin. 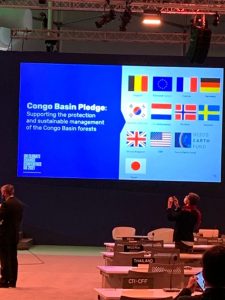 Commodity-driven deforestation has come right up the political agenda – at last.  While the EU finalises its new legalisation on deforestation-free supply chains, a group of 28 countries have signed up to a new Forest, Agriculture and Commodity Trade (FACT) Statement to develop their national roadmaps to reduce commodity driven deforestation.

This is bolstered by ten of the world’s largest commodity traders announcing they will also share their roadmap for deforestation free supply chains by COP27.  Bonsucro stands ready to support them.

Mark Carney announced a new global financial platform, unlocking $130 Trillion of private finance available to invest in the transition to net zero. To support this, a new global disclosure reporting standard will be developed for a more standardised approach to climate and ESG risk assessment. But there is a difference between risk-avoided, and the value-added impacts that the Bonsucro standard delivers. Let us hope that they will learn from the ISEAL community years of experience. Bonsucro is just concluding an ISEAL funded project to develop a methodology to support financial institutions to reward sustainable farming practices in South Africa – next steps are to engage other banks and develop the product further.

The Lowering Emissions by Accelerating Forest Finance (LEAF) Coalition which provides public and private finance to tropical and subtropical countries that successfully reduce emissions from deforestation announced it had exceeded its target of mobilising $1 billion in public-private commitments.

Emerging from the Global Leaders’ Summit, I met with members and partners, including meeting Alan Jope, CEO Unilever. Unilever are one of our more committed buyers sourcing certified sustainable sugar credits, so it was a pleasure to say hello. He was interested to hear that Bonsucro could help them calculate their Scope 3 emissions from their certified sugar supplier.

Later I met with Evandro Gussi, the CEO of UNICA in the Brazilian pavilion. We discussed the role that sugarcane can play in decarbonising the economy, and the many ways that Bonsucro and UNICA can work together to promote this agenda. We spoke about innovation in the sugarcane sector, such as sugarcane biogas, and the alignment between RenovaBio (Brazil Biofuel Program) with the Bonsucro certification scheme. By aligning, we believe we can increase the adoption of sustainable practices in sugarcane production. We also discussed the market’s appetite for sugarcane ethanol and how it plays a crucial role in decarbonising transport. 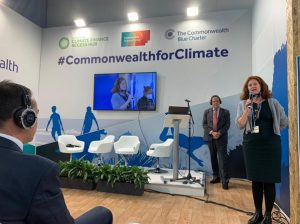 That evening we were invited by the International Sugar Organization (ISO) to an event on sugar and sustainability. We heard from Hon. Josaia V. Bainimarama, Prime Minister of the Republic of Fiji speaking on Fiji’s role in the COP process and the key importance of sugar for Fiji’s economy. José Orive, of the ISO, talked on how sugar contributes to mitigation and adaptation of climate change. It was an honour to be invited on to the stage to share a little about our work.

COP26: highlights from our CEO

Written by Danielle Morley, CEO of Bonsucro Attending COP26 was a stark...

Bonsucro’s fundamental purpose is to create lasting change in the...

10 years on; 10 achievements since the first Bonsucro certification

Bonsucro has one main purpose: to collectively accelerate the sustainable...